Keep up with the latest news, information and inspiration. 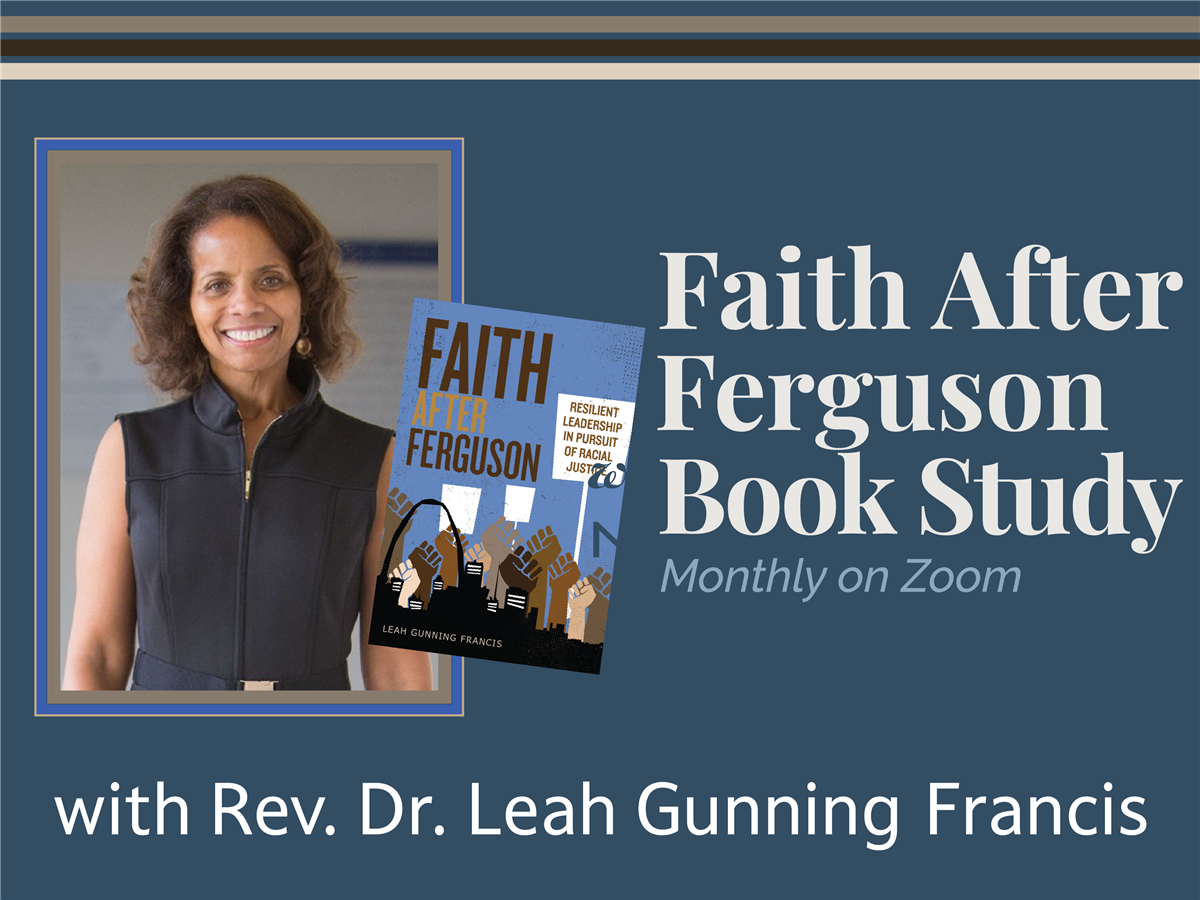 Add to my calendar

In support of the Missouri Conference's work related to race and culture, you are invited to join the Rev. Dr. Leah Gunning Francis and on a journey of practical theological reflection and action through Faith After Ferguson: Resilient Leadership in Pursuit of Racial Justice. Over the course of four, 90-minute virtual sessions, led by the book's author Dr. Leah Gunning Francis and guest facilitators, you will experience fruitful conversation, deepening connections and mutual learning from small group discoveries and reflections on key learnings and insights.

About Faith After Ferguson

Leah Gunning Francis, author of Ferguson and Faith (2015), revisits the clergy and activists from the front lines of the Ferguson, Missouri, Black Lives Matter protests, to hear what they’ve learned in the struggle for justice and healing five years later. Weaving the personal accounts of more than a dozen activists and clergy with her own experiences, Francis offers profound new insights on faith-filled living in response to social injustice as well as lessons for organizing and mobilizing people to effect real change.

Learn from the courageous and resilient leaders on the front lines for justice and discover new ways of leading in the movement for racial justice.

Dr. Gunning Francis’ newest book, Faith After Ferguson: Resilient Leadership in Pursuit of Racial Justice (Chalice Press, 2021) was released in August. She followed up with clergy and young activists from St. Louis to find out what has happened since then and includes reflections on some of the current movements for racial justice nationwide.

In 2012, Dr. Gunning Francis was awarded the prestigious Engaged Scholars Fellowship to study issues of risk among middle-class African American young men. She argues that the meta-narrative about young black men puts all of them “at risk,” regardless of socioeconomic class, and utilizes the narrated experiences of black mothers to construct a new narrative about young black men that honors their humanity and is concerned for their well-being. Dr. Gunning Francis was featured in the 2017 PBS documentary The Talk: Race in America, which focuses on the conversations that Black parents have with their children about race and policing in America.

Dr. Gunning Francis’ additional research interests focus on transformative education as reflected in her doctoral dissertation, Beyond “Band-Aids” and Bootstraps: Toward a Womanist Vision of Christian Education as Social Transformation. Her writing reflects her commitment to the spiritual, emotional and physical well-being of women, men and children; and highlights her particular interest in underserved and minority communities.

Dr. Gunning Francis has provided pastoral leadership for congregations in Georgia, Illinois and Ohio. She has received numerous awards to include the Candler School of Theology’s G. Ray Jordan award for excellence in integrating academic study with constructive leadership and service, and the Fund for Theological Education’s Doctoral Fellow Award. She also had the distinct privilege of being awarded an Honorary Doctorate of Humane Letters by Fontbonne University in 2015 and an Honorary Degree of Doctor of Divinity by Franklin College in 2021.

Dr. Gunning Francis earned a Bachelor of Science degree in Marketing from Hampton University; a Master of Divinity degree from the Candler School of Theology at Emory University; and a Doctor of Philosophy degree from Garrett-Evangelical Theological Seminary in Evanston, Illinois.

A native of Willingboro, New Jersey, Dr. Gunning Francis is married to Rev. Rodney Francis. They live in Indianapolis with their two teenage sons.